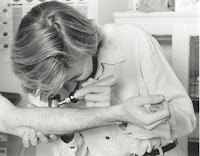 There is a whole generation of native Californians (and Arizonans, et al.) who grew up not knowing how deadly the damage of sun-exposure could be. I'm in that generation. Our parents told us to slather on stuff like Copper Tone lotion, which was a nice-smelling oil but which block the sun not at all. When we went swimming in alpine lakes--about 6,000 feet above sea level--the sun-burns tended to be worse because there was less air between us and the sun, I guess. However, the worst sunburn I ever received was when I spent all day at Huntington Beach. One result is that I've had to have a melanoma hacked out of my leg. Another is that I must visit a dermatologist frequently. Hence the following poem.

As he scans my skin, the dermatologist
talks politics. One of his eyes enlarges
comically behind a magnifying glass.
"Nobody changes Washington D.C.,"
he says, focusing on a small brown
constellation on my wrist. He deems
it "odd but not dangerous." "The most
anyone can do is play the system," he
continues. My body

grants citizenship to new moles every year.
Some are cherry-red. Most are dark brown.
The dermatologist periodically checks
their passports and papers. He's
the Border Patrol of my epidermis.
"The drug companies," he says,
"are raping the system. I can't believe
what they charge for medicine." I'm
naked now before him. He looks
at the scar from a melanoma-excision.
"Looks fine--keep up the good work,"
he says to my leg, which does not respond.
All my moles applaud the compliment.
I begin to add items of clothing to my
my mole-crowded body. The scanner
writes notes to himself about
the case of my skin. He presses the pen
hard into the surface of the paper.
Hans Ostrom