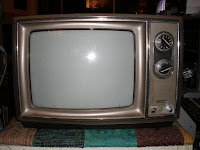 I know it's eccentric of me, but I wish a lot of television-shows, even current ones, were in black-and-white. I also wish the "test-pattern" would appear now and then--the one that used to appear when they ran out of programming. Now when they run out of programming, they run program-length commercials, which aren't as fascinating as that test-pattern, which looked like an elaborate, cryptic target. I also miss all those glass tubes you could look at when someone took the back of the TV off. Televisions now are essentially computer-monitors, aren't they? Oh, well. They seem to work pretty well.

Sometimes he kept the television off
so he might imagine what was in there:
a movie in which books are characters
who talk; a news-program that reports
on only one significant story per week
in unrelenting, exacting detail, commercial-
free; a series in which celebrities interview
ordinary working people and listen; the
Saw Channel; a nest of new-born birds;
a cake; shadows folded neatly like black
linen; a collection of some excellent TV-
moments from childhood; unimagined
wonders.