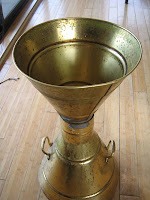 I dropped off two people at the Taste of Tacoma today; they're volunteering at the Wine Tent. Naturally, I'm inclined to take such titles as the "Taste of Tacoma" literally and imagine morsels of sidewalks, slices of warehouses, salads of rhododendron leaves, and distilled paper-mill excretion.

As I let them out of the car and saw how many people had already gathered, I realized the degree to which I'm not much of a "festival" person. I find something fatiguing about all that humanity milling about, literally grazing, and there's a lot of pressure to have fun. My impulse is to retreat to a quiet corner and observe, or to go where people aren't. I've also been accused, rightly, of catastrophizing such events, for I invariably speculate that these Taste events are chiefly a breeding ground for food-poisoning and savage sun-burns.

--Interesting how "taste" took on the connotation of generalized discernment. I haven't checked the OED yet to see when this happened, but I suspect it happened in the 19th century, and maybe the French triggered the move of applying aesthetics to food, beverages, clothing, and interior decoration. Allegedly, they are the inventors of the middle class and of middle-class "taste." But who knows? Maybe "taste" goes at least as far back as the classical Greeks. This will require a visit to the OED.

Apparently at the Wine Tent there are spittoons, into which you may expectorate the wine you've tasted, although I'm not sure whether expectorate takes a direct object. Hmmm. One of my departed uncles had the job of cleaning genuine spittoons, the tobacco-kind, when he was a lad in the 1930s. I think he told me this fact to suggest that my work for him--which included breaking rocks with a sledge-hammer, which he insisted upon calling a double-jack and not a sledge-hammer--was more pleasing than I might think.

I believe that rock-breaking and spittoon-cleaning both require a kind of detachment. One has to focus on the grain of the rocks, and I imagine one has to find a way not to dwell on the fact that the spittoon holds a great deal of saliva.

My dad owned a spittoon but never deployed it. It was considered okay in our household to spit tobacco juice into the wood stove (as long as a fire was burning), the fireplace (same rule), or off the back porch. I chewed tobacco for a while but gave it up long ago--although occasionally I do look nostalgically at a can of Copenhagen in the grocery store. I used a "spit cup" sometimes in the days of "dipping" tobacco. My intuition tells me that this discussion of tobacco and spitting is not very tasteful. Ya think?

I do hope they have a Poetry Tent at the Taste of Tacoma. Maybe you can go in there and ask to be read a poem, or leaf through an anthology, or write a poem and give it to someone, after which you'd say, "Here you go. Here's my poem." The Poetry Tent might be a good place to go after tasting a lot of wine and spitting it out.
at June 28, 2008 No comments: