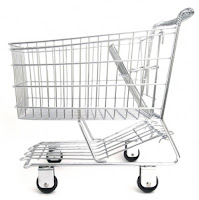 I use the term "grocery-cart," I think, because I want to focus on the Old School metal baskets-on-wheels, as opposed to the plastic versions ("shopping carts") one is more likely to see at a place that sells clothing cheaply. For some reason, really simple, basic technology--like bicycles, grocery-carts, and hand-turned cake-mixers--continues to fascinate me.

Sometimes many grocery carts collectively embrace to create a long hive of silver caging in a parking lot. At night this is how new grocery-carts are born.

From a train, I saw a solitary grocery cart abandoned upside-down on a cresting wave of blackberry vines. I felt the tragedy of its never carrying groceries again. I almost wept, but luckily the train was moving quickly.

Sometimes people who live outside, using layers of clothing as housing, shuffle behind grocery carts filled with all their possessions. The carts look like they were intended precisely for such use. The carts belong to the people.

By accident, I've put an item I wished to buy in someone else's grocery cart. Apologizing, retrieving my quotidian item, I glance at the items the other person has chosen, and I'm envious. What excellent choices they have made! What a superb shopping-list they must have composed before coming to the store!

Sometimes a realtor's face appears on a plastic flap attached to a grocery cart. The face smiles at me no matter what I purchase. It is not judgmental. If I buy pickled herring, the face keeps smiling, as if it were the face of a Swedish realtor.

Sometimes a full grocery cart stands alone on the other side of the cashier's station: someone was unable to pay. One thinks, "There but for the grace of . . .".

Sometimes grocery carts linger at bus-stops. They wait for a bus shaped like a massive grocery cart. This bus will take them home.

Sometimes the grocery cart I select is wounded. It favors one of its wheels. The wheel wobbles like a nervous person. Loyal to a fault, I stick with the cart I chose. It squeaks with pain and wants to stop shopping, but I press on. "Hang in there," I whisper to the cart, "I just have to get some pickled herring and pay for the groceries, and then you may rest."

Sometimes I take an item out of the grocery cart and put it back on the shelf. I think of the person who will buy the item. Our lives will be obscurely connected by the thinnest thread of retail commerce.

Sometimes the eclectic items in the grocery cart seem to be getting acquainted before I arrive at the cashier's station. I can almost hear an orange say to a bar of soap, "What's it like to be processed? I ask only because my cousin became orange juice."

Sometimes too many empty grocery carts are lined up at the cashier's station, as if they're stuck in commuter-traffic, talking on their cell-phones, becoming angry, and tail-gating.

Sometimes pushing a grocery cart up and down aisles between shelves of stuff is a vaguely sad experience. One feels shabby, privileged, and absurd all at once. One feels as if one has pushed the cart into a short story by John Updike.

A grocery cart looks like a genial cage that's always amenable to escape.

Another theory is that grocery carts are baskets woven by artistic robots.

Yet another theory is that grocery carts come from Area 51.

Grocery carts mean too much and too little. That is the way it is with semiotics and with simple technology, so you had better get used to it.