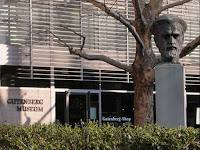 Among the innumerable privileges I enjoy is a personal library, or a close facsimile thereof: three walls of custom-made bookshelves, with a mission-style oak desk roughly equidistant from each wall. Surrounded by books. It took a while, but I finally was able, and was lucky enough, to achieve this modest goal, which for others I live with bears the additional fruit of much less clutter. A place for every book, and every book in its place: well, that's the theory anyway. In practice, some clutter still breaks out.

I was glancing at one of the shelves today when I spotted that most irresistible object: the spine of a thin book. I'm not sure why, but thin books--especially cloth-bound, but also paperbacks--have always entranced me. In fact I do judge such books by their covers, at least at first.

What made this re-discovery sweeter and more symbolic was that the book is about Johannes Gutenberg, conventionally thought to be the first printer/publisher of books in the modern sense; that is, he used movable type. It had been used before in Asia, but Gutenberg used it in a way that led to, well, that led to the Gutenberg Revolution, or what Raymond Williams calls The Long Revolution--that of printing, mass production of books, and increased literacy, all of which led to or was connected to many other revolutions.

The thin book is mis-titled, to some degree, because its content is really a pithy overview of Gutenberg's life, discussion of the interaction between guilds and the aristocracy, and description of Mainz, a city of immense historical importance, and one that sits squarely in the midst of the Rhineland, or Rheinland.

It will not come as a surprise to anyone associated with printing, publishing, and writing that Gutenberg seemed to be in financial trouble virtually his whole adult life. In fact, many biographical details spring from records of law-suits related to these difficulties.

Another privilege I've enjoyed was teaching at Gutenberg University in Mainz for a year when I was an A.B.D. ("all but dissertation), thanks to an exchange set up by an Americna professor named James Woodress and a German professor named Hans Galinsky. I still correspond with a good friend from those days who still teaches in the American Studies Department, or Amerikanistik Abteilung.

Coincidentally, I'd just talked a day or so ago with a colleague who has also spent time in Germany. We discussed one of the innumerable grim facts of World War II: that, owing to the strategy of the "Allies," some German cities were leveled by bombing, while others were left almost completely intact. Thus about 80-90 per cent of Mainz was destroyed by bombs, whereas its sister-city, just across the river, Wiesbaden, was not bombed. The lore I have heard is that Wiesbaden was spared in part because at one point the Allies thought Eisenhower's headquarters might be there, if indeed the war went a certain way. I do not know the actual historical facts about the bombing, however. Mere lore.

In any event, the architecture in Mainz looks extremely modern, whereas in Wiesbaden, numerous "layers" of different architectures are preserved. The red sandstone cathedral in Mainz was not destroyed, and a few other buildings made it through.

Anyway, all of this and more sprang to mind when I happened, by accident, to glance at one of my shelves, saw the thin book, and read it again. I've been back to Mainz once since I taught there, and I'm hoping to get back there again soon. Among other things, wine and history, including the history of publishing, converge in Mainz; that's quite a convergence. And there's a Gutenberg Museum there, too, as one might expect.

Incidentally, the book asserts that Gutenberg's full name is Johann Gensfleisch zum Gutenberg--John Gooseflesh of the Good Mountain. That's one heck of a name. You just don't hear names like that anymore. That's a product of some serious naming practices.
at January 15, 2009 No comments: