Good News: You Seem to Exist

"That there is something is the first, most obvious, and best known thing conceived by our intellect and all the rest follows" --Umberto Eco, Kant and the Platypus

or seems different depending who or what
records the seeming"--awfully inelegant--
but better? Here's the thing:

something exists. Can I I be more specific?
Can the something? The questions answer
yes implicitly, being more specific themselves.

Here is a word: exits. Exits exist, or seem so to you
and so they do, and therefore so do you, so take one

to a fine and rational place.


There is no categorical
imperative or Platonic ideal.

These things do not exist.
They are that. Life is this.

More imaginative than Kant
is God, who does not want,

who makes perfect sense,
who knows the original whence.

Plato imagined he knew
what to make of this stew,

life. His notions were less than ideal.
This stew is terribly real,

not approximation, God knows.
Out of mystery, not forms, creation flows.

We and life are history,
Whereas God is  mystery.

God is neither categorical nor ideal.
God is rather formlessly real. 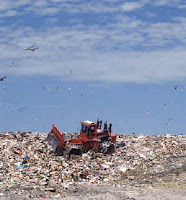 I almost feel as if a Kantian categorical imperative obliges me to say something about tomorrow's election, which is obviously crucial in many ways but also surrounded by hyperbole. It certainly is a distinctive new moment in American and African American history, but the meaning of the moment is of course yet to unfold, let alone be interpreted.

I've been teaching at the same college for over two decades, and the students are obviously more tuned into, informed about, engaged with, and anxious concerning this election--by far--than any election previously. Many of them, of course, are voting in a presidential election for the first time, and they certainly are voting in interesting times.

The disinterested political scientist whom I trust the most predicts that Obama/Biden will "win" 310 electoral votes.

I don't think this poem has much if anything to do with the election, and that is just as well.

New Diggers
*
*
In the near future, people will mine dumps
and landfills for sustenance if not profit. That
stuff we've been tossing out for centuries
gets more valuable every day. Burrowers
will try to borrow it back from the past
we thought we were throwing it into.
Places of refuse live in the future like
bank-vaults. Toward the end of this
profligate era, we'll want to accept much
of what we refused in the way of pulp,
plastic, and metal. Every civilization
needs its diggers. Our civilization
has dumped and buried useful stuff
maniacally and so will soon employ
exhumers to resurrect what once was
waste from out of tombs.


Of course, in almost every nation, in different degrees, people already pick through "garbage" to find valuable or edible things, and a "dust-heap" is central to Dickens' immense, marvelous novel, Our Mutual Friend, which in some ways prefigures our ultra-profligate era. But I have to imagine that some landfills in the U.S. and elsewhere will begin to look like wealth-laden mines at some point, although I'm most willing to be corrected on this most wild guess.
at November 03, 2008 No comments:

Recent comments on recent postings have informed me of the following, which I appreciate:

1. In Tacoma, not only does Alder (Street) turn into Pine which turns into Cedar, but Cedar turns into Oak. Maybe it just continues on down to California and becomes Palm Street. I think there's an idea for a movie or a short story in here somewhere. In Tacoma, people just blithely note that (for example) Pine turns into Cedar. No one seems to want to explore why this is so. I believe there's an existential and/or epistemological debate lurking in this street-name phenomenon. I don't recall Kant or Hegel writing about the streets in Tacoma. Clearly an oversight. Please note, however, that Hammett, in The Maltese Falcon, does mention the philosophy of Charles Peirce in a Tacoma-street context--in the splendid "Flitcraft" chapter, which all philosophy students, but especially those who like detective novels, should read.

2. The New Incredible Hulk may be worth seeing. I think I'll still wait for it to come to television, whereupon I can watch it in pieces. It's hard for me to digest these blockbusters at one sitting. They bust my block. I like to watch European movies on the IFC. The Europeans still make movies about people with human problems. It's very old-fashioned of them. The movies have stuff like conflict and dialogue. Actors play scenes. It's all very quaint.

3. Ants in some parts of Japan are a huge problem, so watch out. Apparently, they're a lot more trouble than humans are over there. Hmmm. Maybe there's a connection here to all those great giant-insect movies from Japan.

5. At least one reader liked Browning's short poem. Those who didn't like the poem can take some consolation in the fact that the poem is short.
at June 22, 2008 2 comments: