The senator called on all
Christians to arm themselves
with pistols and rifles
against something he saw in his head,
a space
also inhabited by oily sand dunes,
asymmetrical concrete blocks,
mud puddles, and small
household appliances.

And by Jesus, of course,
riding into town on a donkey,
his pistol holstered,
the rifle across his legs.

--A Youtube playlist of seven poems that, directly or indirectly, concern Easter: 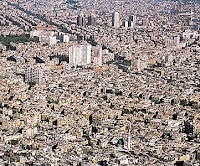 *
*
*
*
*
*
*
*
the photo is of modern-day Damascus, to which Paul was headed
*
*
*
*
I'm beholden to another blogger for triggering the idea for this poem, for she, too, was musing about "a Christian environment" and what different people may mean by that phrase.
*
*
*
A Christian Environment


What's a Christian environment? Who loaded
that question? In the Back-When, a Christian
environment seems to have involved occupied
Pharisees (et al.) and occupying Romans.
Technically, Jesus wasn't Christian, just
as an apple tree's not an apple. (I hear
a thousand theologians running down the hill.)

Then, as now, much misery, success, poverty,
disease, wealth, pride, self-assurance, power,
doubt, heat, failure, force, cold, cruelty, and
mystery seem to have been around. The Christian
environment was hard-tilling. Ask Jesus, so
to speak. He had a go at plowing that rough

field, which harvested him. Self-confident
Christians, devout atheists, and many
others will tell you what a Christian
environment is. You don't even have to
ask them! They'll generously share. In a

dark room, one despairs of defining anything
but despair. Then air through an open window
billows shades. Sunlight, the fastest thing,
bursts through. One blinks, surprised.

There's a dust-up going on at the state capitol in Washington (Olympia). Apparently there's some kind of multi-faith display, and the people in charge of the display included some kind of poster developed by atheists, who wish to celebrate the Winter solstice and to express their view that religion is merely mythic and fantastical and should therefore be dismissed.
Apparently the poster was stolen and ended up at a country-and-western radio station in Seattle. (?) Then it was returned. But then yesterday, some 500 protestors showed up demanding that the poster be taken down. I gather most, though not all, of these protestors were Christian, or claimed to be. The governor doesn't like the poster, but she says the attorney general tells her the atheists have a constitutional right to post their views in the display.
*
*
Of course, the most reasonable response to this dust-up is "Who cares?" Given all the problems government needs to work on, I don't want it spending one second on this debate.
Assuming, for the sake of argument, that we do and should care, however, my second response is that if a Christian (for example) believes himself or herself to be solidly faithful, then what effect could the poster possibly have on the person's faith? Moreover, if a Christian really does perceive the atheist to be an "enemy," then the Christian is supposed to pray for the enemy.
*
*
Third, one of the protestors is the wife of a well known pastor near Seattle who preaches "the gospel of wealth," lives in a mansion, owns a helicopter, and so on. Arguably, "the gospel of wealth" is a greater threat to traditional Christianity than the atheist's poster. Arguably, the teachings of Jesus do not promote the pursuit of wealth, although I'm sure the pastor has worked out his argument for why Jesus would have owned a helicopter.
*
*
Fourth, if the atheists really are devout materialists, scientific positivists, and scoffers at faith-in-mystery or faith-in-God, then why do they want to celebrate the Winter solstice? Following their line of thought, the solstice springs from the phenomena of the earth's orbit and its tilting, so what's to celebrate--the accidents of planetary formation and gravitational force?
*
*
Fifth, it is alleged that dismissing religion as mere counter-factual mythology constitutes "hate speech." I don't think so. I think the dismissal is simply an expression of disagreement. Hate speech would be something like, "Imprison all Christians at Guantanamo!" or "I hate Buddhists!"
*
*
The dust-up suggests that some religious persons and some atheists give religion and atheism bad names. How about if all the groups represented at the capitol participated in a friendly competititon to see which group could distribute the most blankets, clothing, and food to homeless persons in the state of Washington? Helping the homeless does not go against any major faith tradition of which I am aware, and it certainly in no way contradicts atheism. It is also a better use of time than squabbling about a poster that expresses opposition to religion. Counterintuitively, the winner of this competition would be allowed to display the smallest poster next year--would have earned the privilege of displaying the most humility, that is.
at December 08, 2008 No comments: