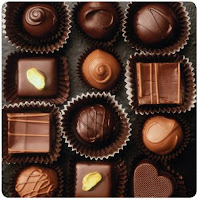 I went out for pizza with some students the other evening. Some of them ordered dessert, so we got on the subject of chocolate. I opined that I thought women seemed predisposed to like chocolate more than men liked it, but such assertions carry less weight than a mousse. Even if someone launched a proper statistical analysis that showed more women liking chocolate than men do, the preference might be cultural or physiological or a combination of both--or, heaven's, even neither.

Nonetheless, I'm sticking with my unsupported hypothesis, partly because the stakes are so low, partly because I can't remember meeting a woman who didn't like chocolate, although I have met some to whom chocolate sometimes gives a headache. I did poke around on the Web and found that one researcher--Anthony Auger--contends that chocolate affects women's brains differently than men's brains, particularly a place in the brain called the amygdale. I didn't know there was a village in the brain that went by that name. Of course, the village appears in both male and female brains, so why chocolate affects the zone in women differently is anybody's guess, or rather Auger's guess.

Anyway, I've been working on a poem about chocolate.

After the moon has set but before sunrise,
sweet breezes issue from dark brown corridors
of a warm, fronded forest. This is the hour of
chocolate, when the mind is weary of merely
thinking and wants to dance with ancient
instincts, to self-induce a swoon by
indulging in lore from forbidden precincts.

Inside cacao beans lies a secret
that survives translations of growth
and harvest, roast and grind, concoction
and confectionery concatenation. After
tasting chocolate, tongues transmit
the news by nerve-line, enzyme,
and bloodstream to mahogany-lined private
clubs in the brain. There receptors
luxuriate on divans and thrill
at the arrival of tropical gossip.
After the messages from chocolate
arrive, brown damask draperies vibrate,
and pleased devotees purr pleasurably.

My darling, I wouldn't choose
between chocolates and flowers,
so I brought both. Let me put
the latter in a vase as you open
and taste the former. Yes, I agree:
chocolate is film noir watched
by taste buds in the mouth's
art-house theater. Barbarously

suave, chocolate is an unabashedly
debauched foodstuff--cad and coquette
of cacao. Darling, you're making
those noises you make when you eat
chocolate--the secret language of
satisfaction, the patter of pleasure,
your mumbled homage to this,
the moment of chocolate.