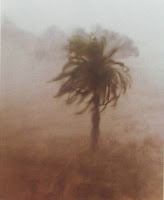 Talk to the wind, the perfect listener. It

will carry your words with it gladly. Rant

your rage at fire, the perfect anger. Fire

consumes even itself. Worry with Winter,

the perfect concern, the chill-factor. It

will fold your fears into its cold clouds sadly.

Connive with the sun, which loves news

and gossip and tries to get around to visiting

with everyone at some point every day. 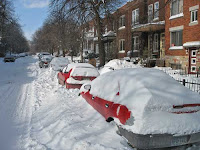 The lingo of those who report weather-news to us fascinates, although it may fascinate less when we're focused on the news itself and how it might disrupt our lives.

A term new to me is "winter mix," which I feel obligated to hyphenate because winter is a noun pressed into service as an adjective. At any rate, it apparently refers that anything-can-happen weather, when rain, snow, freezing rain, or just cold air may greet you when you step outside. There is a note of resignation in this term that appeals to me, as if, subtextually, the weather-person were saying, "You know what? It's winter, and the weather's unpleasant, so sue me." Ellen DeGeneres has a nice bit about how people tend to blame weather-reporters for the weather-news, an attitude sometimes enacted clumsily on the set of local-TV news-shows, where news "anchors" display mock outrage toward their climatological colleagues. "Please tell us the snow is going to stop, Amanda!"

Still, "weather-mix" doesn't measure up to my favorite term, used almost exclusively in the Pacific Northwest, as far as I can tell: "sun breaks," which also should be hyphenated, in my opinion. Essentially, the terms means "cloudy," and everybody knows that, in some circumstances, sunlight may break through clouds momentarily. But saying "there will be sun-breaks" instead of saying "it's going to be cloudy again" may qualify as protesting too much. I hope the "financial" reporters don't start saying, "The economic outlook is still horrible--but with prosperity-breaks in the afternoon, followed by a few minutes of economic justice overnight."

So anyway, I decided to play around with a poem concerning this winter-mix business.

Snow to rain and back to snow
again. Then comes just cold,
which freezes slush and snow
and mud. At last we're slowed
down and up, our feet and wheels
and winged chariots set back
to sluggish paces, in some cases
even stopped by frozen slop
of slush and snow and mud.

This weather lurks beneath
the mean temperature. We're
put in a mercury-mood--heavy,
gray, not quite solid, depressed
by cold. After thaw, abrasive
rains scour streets. Hard wind
mutters under eaves, in
gaps between urban structures.
We escape again into feverish
bustling and maniacal toil, into
the flow of routine we hold dear.