Some Favorite Poets in Translation 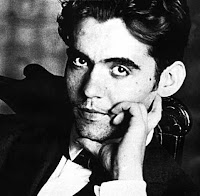 Over a year ago, I posted a list of some favorite poems of mine, almost all from the Anglo-American tradition, although I included one poem in translation by Neruda. The post is on the list of selected earlier posts, and a recent visitor to the blog liked my list but asserted that not including poems by Rilke, Lorca, and/or Cesaire was "criminal." I'm hoping it's just a literary misdemeanor. My self-imposed sentence is pretty light: I thought I'd list some poets whose work I know chiefly through translation, although in some cases I've also tried to read the work in the original language.

I would indeed include Rilke and Lorca (pictured) on the list, as well as Cesaire, a poet whom Langston Hughes liked a great deal and who's also linked with the Negritude movement in world literature.

I'd also include, in no particular order, Basho, Rumi, Goethe, Machado, and Vallejo. I like some of Bly's translations of poems by Machado and Vallejo as well as his discussion of Latin American and Spanish surrealism in contrast to French Surrealism.

Speaking of the French, I do like Baudelaire's and Rimbaud's work, and I like Victor Hugo's poetry, although I'm not partial to the Penguin translation because the translator decided not to replicate the rhyming and form Hugo used, but it's a bilingual edition, so you can look over and see what Hugo was up to.

I like a lot of Swedish poetry and have read some in the original Swedish, especially in the anthology Svensk Dikt. Some students I taught at the University of Uppsala gave me an anthology of Seven Poets From Uppsala (although I've translated the title, and the poems themselves are in Swedish). I also return often to Robert Bly's translation of contemporary Swedish poets, Friends, You Drank Some Darkness. Marie Silkeberg, Gunnar Ekelof, and Tomas Transtroemer are among my favorite Swedish poets.

To round out this international list, I'll include Eugenio Montale, Li Po, Boris Pasternak, and Marina Tsvetaeva, as well as Yevtushenko, whom I got to meet and chat with some 15 + years ago in T-Town.

Obviously this brief list excludes too many great poets, and I've no doubt committed more literary misdemeanors by omission. Sometime I need to mention who some of my favorite Canadian poets are, for instance. Atwood's edition (for Oxford) of Canadian poetry is no doubt viewed as old hat, but I still like dipping into it.