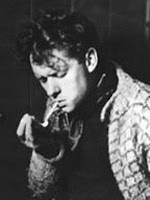 In class we briefly discussed the villanelle, that most difficult form, in which the poet has to repeat whole lines, use only two rhyming sounds, stick to iambic pentameter, and, incidentally, make sense. As I've noted in earlier posts, Dylan Thomas's "Do Not Go Gentle Into That Good Night," Theodore Roethke's "The Waking," and W.H. Auden's "If Could Tell You" are among the most venerable villanelles; however, we also studied one by Jay Parini about the event now known as "Nine-Eleven," and most of the students liked it.

We talked about some moves a poet can make to negotiate the form. We noted that many villanelles are light on imagery and rely on statements, on a kind of conversational discourse. We discussed the possibility of using half-rhymes and of altering the repeated lines slightly--turning a statement into a question, for example, or changing one word.

One student said she found the form difficult to read because of the repetition, which can indeed begin to sound like "nagging."

As great as Dylan Thomas's poem is--and it is, indisputably, a tour de force--I've always felt uneasy about the advice the poem offers, simply because I think people should be able to die with the attitude they choose--assuming, of course, that they are even able to choose the attitude with which they approach death. I had a very close older relative who died of heart failure but also, indirectly, of dementia, so she was not able to approach death--mentally or spiritually--in the way she might have chosen. So if I or anyone had advised her not to go gentle into that good night, it would have been pointless, at best. But this takes nothing away from Thomas's indelible villanelle.

Still, I finally decided to write a wee response-villanelle with D.T.'s poem in mind, although I confess the main task here is just to get a bit of a workout. Villanelles offer good aerobic poetic training, even if they don't turn out perfect or fall far short of perfect.


Go As You Wish Into That Good Night


Go as you wish into that good night.
It's not a night, of course. It's death.
To tell you how to die? I have no right.

Besides, death often hides nearby, plain sight--
Then someone's gone, as quickly as a breath.
Go as you wish into that good night,

Assuming you're allowed your wish. I might
Not even be around, to tell the truth.
To tell you how to die? I have no right.

I've not yet died, have not yet faced the fright
Of certain death, so here's my guess:
Go as you wish into that good night.

I sympathize with D.T.'s rage. That sight
Of one who's dear about to die: Damned death!
But still: go as you wish into death's night.
To tell you how to die--I have no right.