Narration In Three Parts, Thanks to Frank O'Connor 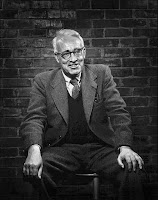 One of the best books I know on the art of writing short fiction, as a genre distinct from novels, is The Lonely Voice, by Frank O'Connor, pseudonym of Michael O'Donovan. O'Connor wrote many great stories, but his best known one is probably still "Guests of the Nation."

In The Lonely Voice, he argues that the short-story form is better suited than novels to the project of revealing the lives of "submerged" populations in society; of course he meant the term figuratively, but during the debacle in New Orleans, the term became frightfully literal and figurative both. People perpetually at the margins of society were also inundated by water--and by incompetence & indifference.

O'Connor didn't have any formula for deciding on who is submerged and who isn't, but he thought that, for short-story writers, Nikolai Gogol led the way when he wrote about the man in "The Overcoat." Social status has something to do with being submerged, but not everything.

At least one other great thing in the book is O'Connor's simple, effective demonstration of the concepts exposition, development, and drama (or conflict). Here's his demonstration, from p. 26 of the 1985 Harper Colophon edition of the book:

"Exposition we may illustrate as 'John Fortescue was a solicitor in the little town of X'; development as 'One day Mrs. Fortescue told him she was about to leave him for another man'; and drama [conflict] as 'You will do nothing of the kind,' he [Fortescue] said."

Yesterday in the fiction-writing class, I invited students to write three "stories" in three sentences modeled on O'Connor's illustration: exposition, development, drama. I suggested that for a couple of these, they could add a fourth sentence that pointed toward a resolution to the drama. I also said they could use more than one sentence, or use a long sentence, for each section, if necessary. They came up with some terrific stuff. As usual, I wrote with them, and I decided to base one of my responses to the prompts on a familiar story. My version goes something like this (I don't think I used numbers yesterday), and I added a sentence that feinted, at least, toward a resolution:

1. Joseph, the owner of a small business in the Middle East, was engaged to a young woman from the same rural area.

2. One day Joseph said to the young woman, "This is going to sound rude, and I apologize in advance, but you look pregnant."

3. Joseph's young fiance said, "I look pregnant because I am pregnant, and what's more, I'm still a virgin, I know who the father is, you're not the father, and I'd still like to marry you."

I was talking with a colleague who is teaching a course that includes the great Victorian novel, Middlemarch, by George Eliot, pen name of Mary Ann Evans. We were observing that many passages in the novel are poetic because the phrasing is so superb, heightened without going over the top. Here is a little poem by George Eliot:

You love the roses - so do I. I wish
The sky would rain down roses, as they rain
From off the shaken bush. Why will it not?
Then all the valley would be pink and white
And soft to tread on. They would fall as light
As feathers, smelling sweet; and it would be
Like sleeping and like waking, all at once!

I find much to like in this little blank-verse poem. The speaker addresses "You" and even mentions that this "You" loves roses. But by the end of line one, the poem has turned permanently to what the speaker loves, wishes for, and imagines. What a great surprise. We think the poem is going to be "to" and "about" this "You," but it's not. The poem seems to be literally about rose-rain and figuratively about wishing for something you know won't happen but enjoying the wishing just the same. Comparing roses or rose-petals to sweet-smelling feather is good, too, even if "light as feathers" is and probably already was a cliche.
at November 02, 2007 No comments: