How lovely of us to help
others keep us under surveillance
with devices we have solemnly,
enthusiastically purchased. A
good citizen is an informed citizen.

Some of us stand in line and ready
to trample each other to get mitts
on the new stuff. We're eager
to help states and corporations
know where we are and what
we're up to. Lovingly we tap

our devices with finger and thumbs.
We message, instantly! We opine.
We stay in touch. We stay in range. 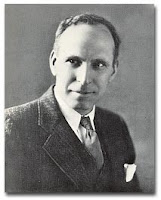 (photo is of Roger Baldwin, founder of the American Civil Liberties Union)


A civil liberty might be defined
As a chance to have a prayer to defend
Oneself against a power that's aligned
With secrecy and certitude, that's then
Brought out much of the worst in some
Of the cohort who enjoy power, which tends
To unhinge folks. What, however, has been done
Might be undone, with rights restored to mend
The rips in practices that hold a clear
And wary view of power. Checks and rein
And oversights on reign: basic but dear.
Unbounded power just tends to go insane.
Since that's the way it is, that which concerns
Our civil liberties is a priority that burns.