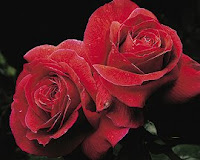 Is there a flower that humans have been more obsessed by than the rose? Maybe the cherry-blossom; and, indeed, the rose-obsession may be more Western--Greco-Roman/Euro-American--than Eastern. And it's a bit ironic that the rose itself is a bush, a shrub, and of course the cherry is a tree.

Lilies, orchids, daffodils, and poppies have all drawn their share of attention. But especially in Western religious and poetic traditions, the rose seems to have it all going on. Bill the Bard, Robert Burns, Bill Blake, Gertrude Stein, Jean Genet, and even George Eliot (in a wee poem) have famously weighed in on the rose. Rose-poems must number in the millions.

To those who grow roses--or, more accurately, assist roses in their growth--the rose tends to discard its several cultural symbols and starts to represent work, a battleground (chiefly person v. fungus and person v. aphid), a vegetative entity with diva-like whims but also astonishing resilience, and unrequited love. Yes, rose-gardeners fall in love with their roses, in many cases. It's not a pretty sight. That's when the whole thorn v. blossom mythology kicks in.

I had a 20-year fling with roses. Mulching, pruning, spraying (I stuck to organic sprays like neem oil, and a mild, non-detergent soapy spray does just fine with aphids), weeding, staring. A lot of staring. And sighing--in frustration. Fertilizing (I liked organic fertilizers). There is, of course, the illusion that it's all worth it--such as when you pick what really looks like the perfect rose--a blossom, say, from a Mister Lincoln--and the color & perfume really do almost make you swoon, and then you show it to someone else, and they almost swoon. From different objective distances, however, one may raise all sorts of objections to the time and energy spent on roses, to the Rose Industry (floral shops, rose "breeders," garden shops), and to the culture's rose-fetish.

Oddly enough, the most amazing roses I've seen are wild ones growing in a pasture in the Sierra Nevada. They basically turn into huts--an igloo of vines. Once one of our neighbors read about how much Vitamin C was in rose hips--those knots that grow after the petals have fallen--and she began to brew and drink rose-hip tea. Apparently the wild rose-hips had something else in them, however, because she got a little loopy and had to give up the tea. Jonesing for rose-hips. Wow.

Solid tips I picked up over the years: in the Pacific Northwest, prune roses on or near President's day; prune roses into a kind of bowl-shape, and attempt to eliminate the branches on the inside (roses seem to need some space "inside" to ventilate themselves; don't over-fertilize (I know: but what does that mean?) ; checking for aphids is actually more important than waging war on them (when you see them, spray a mild solution of Ivory soap on them; also, ladybugs really do like to dine on aphids).

In the imaginary court of gardening, roses and I reached an amicable rose-divorce. When I stroll past an impressive rose garden, I am most intrigued--and then fatigued, as I imagine all that work, the constant attention.

I did exceptionally well with two kinds of roses, both venerable--Queen Elizabeth and Mister Lincoln, one pink and the other red. I did okay with Peace roses, too, and I had pretty good luck with yellow roses--Sun Sprite was one I liked. A rose called Oklahoma did not do well in the Pacific Northwest, at least for me (and I'm a rank amateur), but that one had my favorite rose-aroma. Roses by other names didn't smell as sweet, nyuk, nyuk.

A poem, then, for rose-gardeners (I think it's in iambic tetrameter):

To one who cares for roses, rose
Refers to the whole plant; the flow-
Ers are a kind of coda. To one
Who cares, the tale is in the soil,
Which should be dark and rich and loose.
It should be mulched, and it should breathe,
Perhaps give off a faint bouquet
Of chocolate. The tale proceeds
In pulpy roots of rose, and in
The branches which shoot up so fast
The green-and-purplish growth can seem
A little other-worldly. Leaves
Have much to say as well. They should
Be waxy and deep green but are
Impressionable, go black or brown
Or yellow from the merest wink
Of fungus. Thorns amaze--ornate
Medieval armor for a plant. If
The flowers come and keep coming,
Then one who cares for roses has
Assisted earth and plant to tell
The story well and now may stare,
May bend to sniff perfume or clip
In twilight of a long ritual--
The caring for the whole rose plant.
at August 19, 2008 No comments: