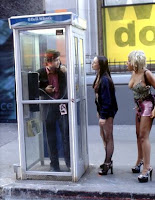 If you hang around academics who teach in the humanities, then you have my condolences. Just kidding. Before that rude clause intruded, I was about to write . . . then you will eventually hear the terms "subject-position" or "positionality."

No, the words don't refer to yoga or Zen, or to grammar, or to sports, in which one may play different positions.

They refer to what used to be called something like "point of view" or "perspective."

Yesterday my point of view was pretty glum. In fact, I may have had the blues--or "the blue-devils," as Abraham Lincoln referred to the condition. But I managed to get some perspective on my perspective by evening (nice word, evening). Good grief, now the lyric, "I just dropped in to see what condition my condition is in," is in my head--Kenny Rogers and the First Edition--help!

Anyway, my perspective, a couple of close advisors, and I watched a film from the Eighties, Diva. French film, 1981. And--surprise!--it was as good as if not better than I had remembered it, and I hadn't seen it since 1981. It is visually superb without being mannered.

In part in concerns electronic recording, and although the equipment is antique and therefore potentially laughable, the writers and directors don't make too much of the technology. Recording and plot mix with the ethics of recording, so you don't focus on extinct things like cassettes. Toss in just a bit of Zen, opera (and music in general), race, gender, wit, and exploitation, and you have a terrific movie, and one that knows its limits. It's one of those films that tries just hard enough but not too hard.

I did notice how much longer scenes from Eighties movies are. There's very little manic camera-work and editing-on-speed that characterizes most feature-films today. I think the attention-span of visual-image consumers now can't span very much.

Oh, and the diva happens to be a diva in real life: Jessye Norman, American opera-singer.

But back to "positionality." Why was a funny new word like that necessary to invent? Well, that's partly what academics do. They invent new words. Also, the emphasis is placed on what a person or a character in a novel or a writer does, as opposed to what that person sees or thinks, so there's a focus on power or (wait for it) "agency." Also, one may speak of "positions" in relation to one another. (Wow. Go crazy.) Of course, there's some recent post-modern, post-Structuralist history to the shift in terminology, but we needn't go into that.

I've misplaced my subject-position. It happens.
According to the post-modernist rulebook, which
is only virtual, my default positionality is therefore
one of befuddlement, which could be a ruse, except
a ruse seems so pre-modern, even atavistic. One
thing's certain: I'm not a mystic. Positionality
is such a tricky business. If you write or speak

the word, "positionality," then you've pretty much
positioned yourself into a pretentious corner, and
the commonly insensitive Anglo-Saxon ax will fall
on your multi-syllabic Deluxe Latinate Impressor,
which comes with its two-speed abstractionator.

Cut to: a meadow. My subject-position transport-
system, a hot-air balloon, lies sideways and un-
inflated, mere fabric amidst flax-stubble. This
is Not A Problem. This is Laugh Out Loud.